This blog is a continuation of a four-part series on film written by Jake Kelly. For more information about Jake and to review the earlier 2 movies, check out our blog post for Part One HERE.

“You’re trying? Now? Where were you when it mattered? I needed this guy back when I was a kid. I don’t need you now. It’s too late now.”

Warrior is a movie about a family: two brothers and their dad. However, this family has been broken apart for some time and is suddenly brought together again when a chance to win five million dollars in an XMA (UFC) competition is at stake. Both brothers are trying to enter the competition for the prize. One brother is fighting for his own family. He, his wife, and their two daughters are about to lose their home. The other brother is fighting to support his fallen comrade’s wife and son. Can they come together again in this sudden chance to renew their family? There’s a lot more they are fighting for than just money.

I first saw this movie with about eight other guys at a downtown movie theater in San Diego. It was a great experience to watch this film with a bunch of guys, close friends, that can resonate with the two brothers wanting to fight out their problems. Both brothers have been greatly shaped by their early life and have been torn apart because of their situation. Their father was a heavy drinker and drove everyone away. The younger brother, Tommy, played by Tom Hardy, left with his mom and moved across the country just to get away from the dad. The older brother, Brendan (Joel Edgerton), decided to stick around because he was romantically involved with a girl, his now current wife. At the beginning of the movie, everyone is older and Tommy has come back to the city to visit the dad. We are thrown right into this mess of a family crippled with hurt, confusion, blame, and division. This movie revolves around this family and their wounds.

We follow Tommy and Brendan in their quest to get this huge prize that both would go to any length to win. We are with them in their training; we are cheering them on in the ring; we celebrate their victories. Yet, as much as we want one of them to win the tournament, we are ultimately rooting for them to win their family back. I enjoy Warrior because it’s really about a family fighting themselves, no matter how many people they fight in the film. This is clearly seen in one of my favorite scenes in the movie.

On the first day of the tournament, which is held at a casino in Atlantic City, Tommy wins both his fights. Later that night, he is found at the slots by his father because he can’t sleep. In a sudden moment of his dad trying to mend their relationship, Tommy tells his father that his path to sobriety and trying to ask for forgiveness is worthless because it doesn’t matter anymore to him. His father is told to go away by Tommy throwing his cup of coins on him. As his dad walks away, we see Tommy glance back at him questioning what he just did. The next day, Tommy hears loud noises from his hotel room. He opens his room door to find his dad. He’s in a robe, pacing around the room listening to an audio book on tape, and he has a bottle of alcohol in his hand. His dad has relapsed, quite badly in fact. Tommy once again sees the dad of his youth: a terrible mean drunk who in no way resembles a human being that is capable of being loved and loving others. Tommy is left speechless. He slowly moves towards his dad and grabs onto him. He pries the bottle out of his dad’s hand and carries him to a bed. Taking the tape player off his head, Tommy sits down at the head of the bed and pulls his father on top of him. In this moment of complete vulnerability, Tommy holds his dad and calms him down until he drifts off to sleep.

In Letter to Artists, John Paul II writes, “Artists are constantly in search of the hidden meaning of things, and their torment is to succeed in expressing the world of the ineffable.” I would say this describes Warrior for me; it seems like a film about big strong guys fighting each other for a big cash prize. However, I believe the writers and director of the movie are trying to do something else. I believe that they are really asking us, “What makes someone a warrior?” What makes these men warriors?

Lieutenant Doyle: “I admit it does have a mysterious sound. But it could be any number of things for the wife disappearing. Murder is the least part.” L.B. Jeffries: “Now, Doyle, don’t tell me that he’s just an unemployed magician amusing the neighborhood with his sleight of hand. Don’t tell me that.” 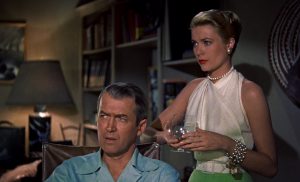 Rear Window (1952) is about a photographer that is confined to a wheel chair and, while having his surrounding neighbors in plain view, believes that one of them has killed their significant other. L.B. Jeffries, played by Jimmy Stewart, is a daring photographer that was injured on a photo shoot, very much due to his imagination. Now in a leg cast and a wheel chair, he has nothing but the view of the surrounding neighbors in the courtyard behind him for amusement. One night after falling asleep in his wheel chair, he wakes up to the sound of a woman’s scream. The next few days become a mystery for Jeff as he starts to believe that what he heard was the scream of someone being murdered and he believes he knows who did it. With the help of his beautiful high-society girlfriend, Lisa, played by Grace Kelly, and Stella, his on-call nurse, Jeff tries to find evidence of the murder and make sure the killer is brought to justice.

I would be remiss if I didn’t talk about at least one film created by director Alfred Hitchcock. Along with many historians of film and TV and hundreds of critics, I also agree that Hitchcock was a master of cinema and a genius at crafting stories. Rear Window easily stands out as one of my favorites in his filmography. First, the movie is shot completely inside the apartment of L. B. Jeffries. It’s almost as if we were sitting right next to him as he gazes out his window fascinated by the different lives of the neighbors surrounding him. This choice by Hitchcock for us to stay in the apartment with Jeffries adds to our perspective. We, like Jeffries, are not sure that a murder took place. At certain moments in the film, Jeff wants to leave his apartment because someone is in trouble and he can’t leave his wheel chair. Like Jeff, we can’t leave either. We are left sitting down only imagining the worst of things. Second, the relationship between Jeff and his girlfriend Lisa and their dialogue throughout the film is entertaining to no end. Lisa wants Jeff to settle down from his nomadic photography excursions, which seems completely impossible for Jeff. She even talks about joining him in his travels. As a model and member of high society, Jeff can’t even imagine Lisa being able to survive outside safe and simple city life. So, as we watch everything unfolding with Jeff believing there was a murder and trying to find evidence of it, we are charmed at how Lisa becomes involved in helping Jeff.

One of the most memorable scenes of the film is when Jeff, Lisa, and Stella, Jeff’s nurse, find out that the murderer is trying to pack up his apartment and leave for good. In an effort to slow him down, they decide to slip a message under his door to get his attention. Lisa volunteers herself to drop off the letter. Next, we watch from Jeff’s apartment as Lisa travels across the street, into the adjacent apartment, and right outside the killer’s door. As she slips the letter under, the killer quickly opens the door and reads the note. He then goes outside his room and tries to find the person that left the message. Luckily, Lisa is able to evade him and loop around his apartment. As the killer finally gives up and walks back to his room, Lisa retreats to Jeff’s apartment. When she comes in, Lisa is ecstatic at the dangerous risk that she just took. As she talks to Stella, Jeff is turned around in his wheel chair with his chin resting on his forearm and he stares at Lisa in awe. Jeff is taken aback by this new adventurous and daring Lisa. He is completely captivated by her.

Rear Window, even though it is an older film and can seem slow at times, it manages to tell a great story without the rough content that consumes most modern films. It’s a simple thriller, with great dialogue and a fun cast. Unlike most films and directors, Hitchcock is a master of the camera. His touch and imagination easily doubles the efforts of countless filmmakers. That’s why he is studied by all directors. “Obedient to their inspiration in creating works both worthwhile and beautiful, they not only enrich the cultural heritage of each nation and of all humanity, but they also render an exceptional social service in favor of the common good” (Letter to Artists). I don’t think it’s too much of a reach to say that Alfred Hitchcock, that a director, influenced society in many ways for the better.